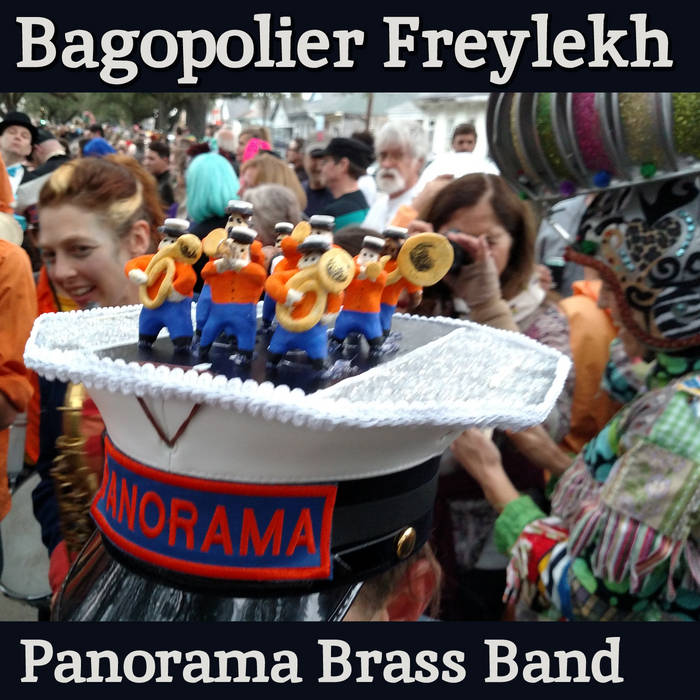 For the past two years in November, even though it was still several weeks early, we released a Hanukkah themed tune. See "Home for the Holidays" (Nov 2014) and "Hanukkah on Japonica" (Nov 2015). In both cases, except for a brief reference to a Hannukah song called "Sevivon" in our 2015 edition, the music was comprised of traditional Jewish instrumental melodies for which we fashioned new titles to repackage them as holiday songs. Call it show biz or perhaps "The Folk Process."

Your Panorama track for November, "Bagopolier Freylekh," is another Jewish instrumental melody but this time let's skip the pretense. Just a hard-rocking klezmer tune played by a brass band full of swagger. This is another one from Panorama Brass Band's legendary Ash Wednesday 2013 session at Piety Street Studios. Dig also "Norma La De Guadalajara" (Feb 2015), "Geljan Dade" (Feb 2016) and "Purim In The Quarter" (Mar 2016). On this number you'll hear the gang, exhausted from a busy Carnival schedule but happy and confident, on a Jewish wedding dance that feels here more like a rowdy street party.

The title refers to a "freylekh," or happy dance, from the city of Bogopol, now called Pervomaisk, located on the Southern Bug river in Ukraine. We learned it from our alto horn player, Patrick Farrell (you will hear him establishing the tempo at the very top), who learned it from a recording by the great Harry Kandel. (The Kandel recording is titled "Bapolyer Freylekhs." Check it out.)

Much gratitude to Wikipedia and the hundreds of writers and editors who make it what it is. We've donated to support their
work and YOU can too!

Special thanks to Mark Bingham for wonderful food and beautiful vibes during the session.