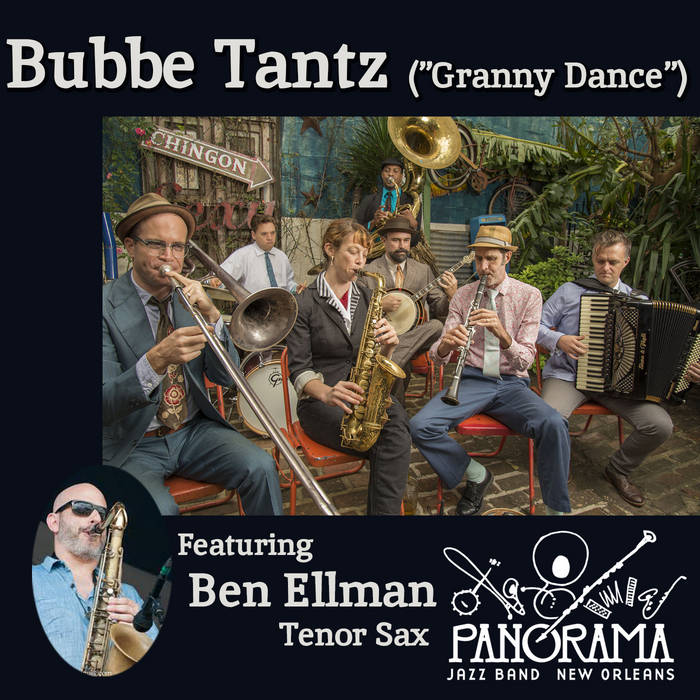 We dedicate the "Bubbe Tantz" ("Grandmother Dance") to the memory of Elaine Hoffman Watts who passed away on September 25th at the age of 85. She was a drummer deeply rooted in her family tradition of Yiddish music going all the way back to the Ukraine many generations ago. She was also a cultural grandmother to many of us working in the klezmer world. She and her daughter, trumpeter Susan Hoffman Lankin-Watts, were both exceptionally kind to Panorama when we played in Philadelphia last year. They loaned us a drum set and gave us sage advice on playing klezmer music. They said, "Just play it pretty."

Many years ago, before Panorama clarinetist Ben Schenck started the band, he played with an outfit called the New Orleans Klezmer All-Stars. The tenor saxophonist then (and now) was a young Californian named Ben Ellman who came to New Orleans to seek his fortune in 1989. He started playing gigs with the NOKAS, knocked around with a freaky, go-for-it project called Lump, played second-line parades with the Little Rascals Brass Band and eventually hooked in with a local bar band named Galactic Prophylactic.

He still plays occasionally with the klezmers, tours internationally with that post-Meters funk institution now known as Galactic and has also made a name for himself as a successful record producer with the likes of Trombone Shorty and The Revivalists, with whom he's recently scored a gold record.

Ellman recently made time in his busy schedule to record a number with Panorama that he and Schenck used to play back in the day called the "Bubbe Tantz." For those of you who may not know, "Bubbe" is Yiddish for "Grandmother" and "Tantz" means dance. Part of the melody comes from the wedding scene in the 1936 Yiddish film, "Yidl Mitn Fidl" (literally "Little Jew with a Fiddle"), starring Molly Picon. The rest comes from a vinyl LP that a friend loaned Schenck back in '92 called "Sound of the World's Soul," by a group named the Kleveland Klezmorim. Schenck transcribed the tune at that time and offered it to Ellman as a tenor sax feature.

The present version begins with Mr Schenck calling the band to order, answered by accordionist Michael Ward-Bergeman. Then Mr Ellman delivers the main theme, popping his bell-tone and painting a portrait of a no-nonsense-yet-doting old Granny dancing at her grandchild's wedding.

Last year another friend of Schenck's who works in a used record store here in New Orleans left him a voice mail saying "we just had an interesting looking klezmer record come in. I pulled it aside for you." Sure enough, you guessed it: the same Kleveland Klezmorim album. The old friend must have traded it in. Ben passed by, snagged it and revisited the tune which got him thinking about his old bandmate.