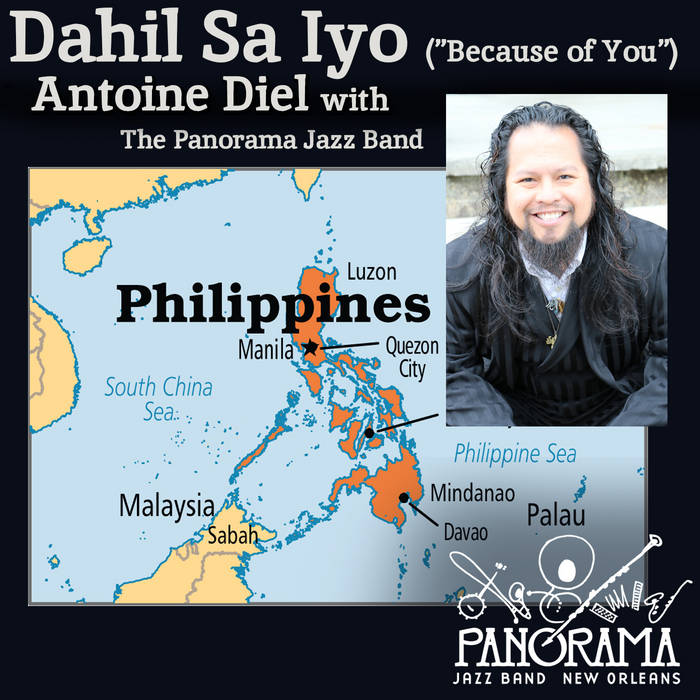 Antoine Reynaldo Diel was born into a musical family in Manila, Philippines and grew up singing in church and at community events. After the family moved to Los Angeles, he studied vocal arts in both high-school and college. He's done opera, musicals, solo and choral concerts of both sacred and secular music and performed regularly with the Three Filipino Tenors, Vaud and the Villains and the Orchestre Surreal.

Antoine had made the move to New Orleans in 2013 to get involved in the local music scene when Panorama clarinetist Ben Schenck heard him at the Spotted Cat with his band The Misfit Power. They struck up a friendship and Ben, enchanted with Antoine's tone (and it's notes of honey, velvet and liquid gold) eventually brought up the idea of a collaboration. Antoine suggested they record "Dahil Sa Iyo" ("Because of You") and, although it took a couple years, Ben began studying the song, imagining a Panorama take on it and organizing a session.

"Dahil Sa Iyo" had its original premier in the 1938 Filipino movie "Bituing Marikit" ("Marvelous Stars") and represents a traditional form of Filipino serenade called Kundiman. It crossed over to the US largely due to the English lyric by Tom Spinosa and has been recorded by Nat King Cole among others.

Antoine first sings it in the original Tagalog (the national language of the Philippines) then delivers an English version. He suggested we set it in the tempo of a Cuban bolero (with Doug Garrison overdubbing bongos) while Ben envisioned the sound of a National Steel guitar (played by Georgi Petrov) to evoke a bit of a South Pacific tone. This session also marks the only time since our first album in 2003 (Another Hot Night In February) where we've recorded using string bass (here played by Martin Masakowski ) instead of tuba.

Because of you, love is sweet and tender.
And this my love I will offer you:
If you will care for me, all things to you I'll be.
My heart is ever true because of you.

Long have I endured in my life.
The pain and sorrows from Love arise.
Then you came and redeemed me, my dear,
My only hope in my darkest fears.

Because of you, I yearn to be alive.
Because of you, ‘til death (you) must realize
In my heart I know there is only you.
And ask my heart, you’ll know that this is true.

Because of you, I found happiness.
That to you I offer this love that is so blessed.
Though indeed I may be a slave for loving you so true
It matters not to me, ‘cause everything’s because of you.

Extra special thanks to New Orleans fret-man Matt Bell for the loan of his new National Steel tenor guitar before he even had a chance to get his hands on it!