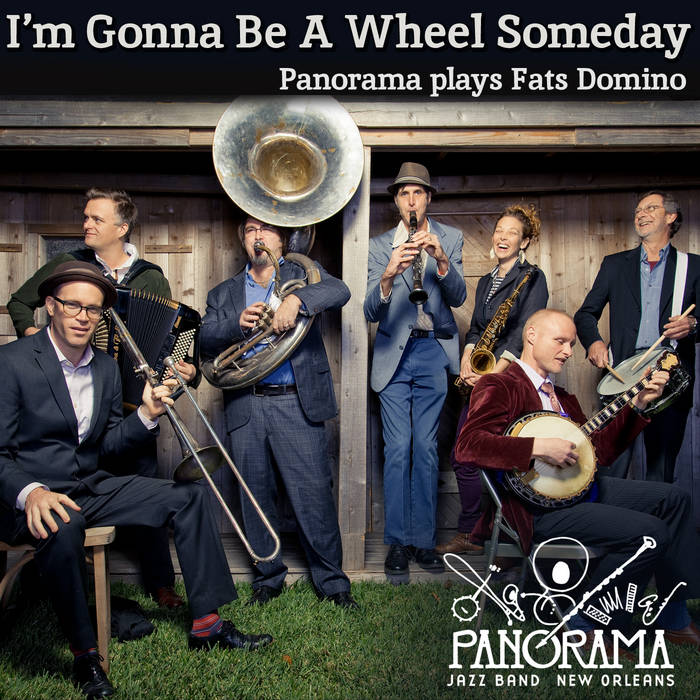 "I'm Gonna Be A Wheel Someday" is a number written by Fats
Domino and Dave Bartholomew and recorded by everybody from
Bobby Mitchell and the Toppers (1957) to Paul McCartney (30 years later). Our version (30 years after Sir Paul's) is patterned after Domino's own 1959 reading on Imperial Records that made it to #1 on the US R+B chart.

Steve kicks off the party with a big tuba "whoop" leading into a gang shout that recalls a New Orleans second-line. Ben then delivers the tune, akin to a children's street rhyme, as a self-confident hot-shot bragging that he'll soon be too good for his old friends. The vocal chorus is followed by inspired blows by Charlie on trombone and Tomas on alto saxophone, propelled by the rhythm section, Steve
driving the bass counterpoint, with Ben giving verbal encouragement.

One thing you can say about Fats Domino, a musician who has influenced everybody in pop music right on up to the Beatles and the rest. He has never forgotten where he came from. We played a wedding back in March and afterwards one of the banquet waiters came over to us and said, "y'all played one of my favorite songs" (referring to "Wheel"). Turns out Fats Domino is his uncle. When asked after Mr Domino's well-being, he told us that Fats, now 89 years-old, has moved out of his old house in the Lower 9th Ward, lives with his daughter out in Harvey and loves nothing more than to stay home and boil fresh seafood in the back yard with his friends, family and neighbors.

As for us, our big break is right around the corner and when it hits, you can find us by the pool in Beverly Hills.