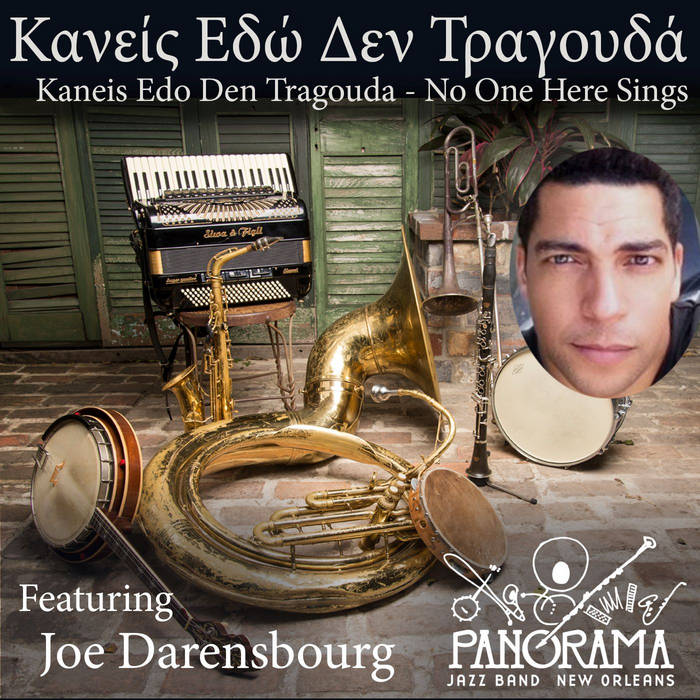 Last Summer my dad, a buddy and I dropped in to Preservation Hall to hear the band and say hi to friends. Quite unexpectedly, we were ushered into the inner sanctum (a cozy office behind the back courtyard) by Artistic and Managing Director Ron Rona. They'd been putting on a Sunday salon featuring local bands trying something new and Ron invited Panorama to give it a go. We eventually landed on the idea, inspired by a quote from 20th century journalist A.J. Liebling (see below), of juxtaposing Mediterranean and Caribbean music. We called it "Mediterribbean Afternoon." There would be catering, cocktails, a beautiful hang, good bread plus we'd get a chance to play again in one of the holiest and acoustically lovely rooms in New Orleans.

Then came the problem. Although we already had a lot of Caribbean music in our book, what Mediterranean music would we attempt? Until that point, it had been an idea without a deadline and no leading candidates for eligible tunes.

Enter Joe Darensbourg. When I was working with a Jewish themed funk band in the early 90s, Joe, a Creole from New Orleans' Treme neighborhood, used to come out to hear us at Cafe Brasil. Nephew of a clarinetist by the same name who recorded and toured with Louis Armstrong, and a Punk rocker in his own right, Joe was drawn to the exotic melodies we were throwing down. He and I started hanging out, playing a little and talking about the various modes and rhythms heard in Eastern Europe. Before long he was off to Boston to study Greek, Sephardic, Arabic, North African and Turkish music and stayed there 13 years. Joe moved home recently and brought with him a deep cache of (and soul connection to) all kinds of Mediterranean, Eastern European and Western Asian traditions. We began work on a set list and Joe made the gig at the Hall with us, singing in Greek, Arabic and his native Creole.

One of the numbers Joe brought in, "Kaneis Edo Den Tragouda," is from Greek songwriter Nikos Papazoglou. We learned this lament, describing the singers feelings of loss when her lover has gone, from a version by the popular chanteuse Glykeria ("Sweetness"). At the recording session, Joe and I were trying to communicate the feel of the Greek dance tempo "zeibekiko" to the other cats on the session. We felt the closest thing in New Orleans may be what they call "leadfoot," a slow, heavy step done in funeral parades to dirges like "Closer Walk." For this tune, we also called in Bulgarian-born, New Orleans living banjo and guitar man, Georgi Petrov. He plays the vamp on tenor banjo but then breaks out his cümbüş (pron. "jumbush"), a Turkish iteration of the banjo, for the taxim (the improvised section) over a tsifteteli groove.

Panorama would like to dedicate this track to the memory of a close friend of both Joe and Ben, Michael Pelias, a poet and musician with a huge heart who died last summer. His family originated from Greece and he felt a strong kinship with the music of his ancestral homeland.

Mike, we think of you when we play "Kaneis Edo Den Tragouda." We loved you more than you knew and we'll miss you until we see you again. We'll be hiding in the corner of the tavern to catch a glimpse of you.

"New Orleans resembles Genoa or Marseilles, or Beirut or the Egyptian Alexandria more than it does New York, although all seaports resemble one another more than they can resemble any place in the interior. Like Havana and Port-au-Prince, New Orleans is within the orbit of a Hellenistic world that never touched the North Atlantic. The Mediterranean, Caribbean and Gulf of Mexico form a homogeneous, though interrupted, sea. New York and Cherbourg and Bergen are in a separate thalassic system."

No One Here Sings

I remembered, we used to drink
At this very table
Now who knows where she's running to
Who knows what she's looking for

* A baglama is a small instrument of the lute family. In Greek folk music, it is the symbolic companion of the heart-broken or down-trodden.