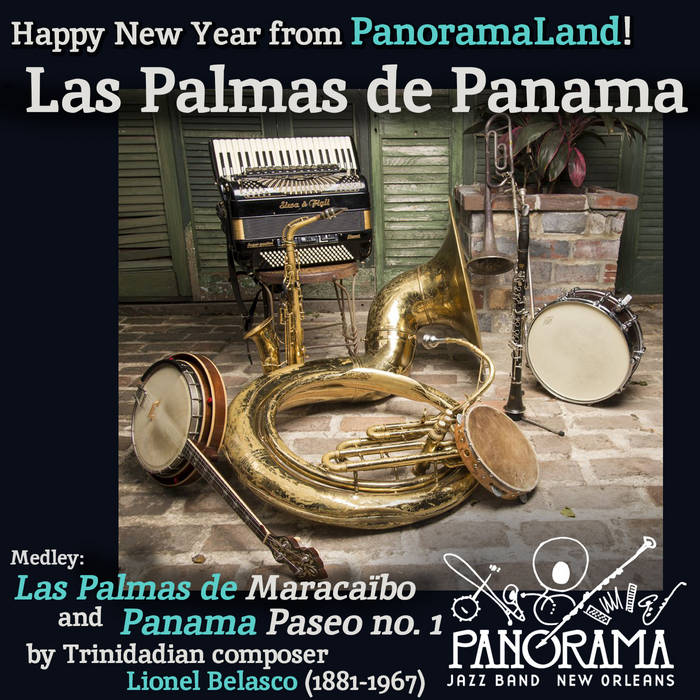 Lionel Belasco (1881-1967) was born in Trinidad to a Creole mother and Sephardic Jewish father. Growing up as a piano player he was more an observer than a participant in Trinidad's Calypso scene but he began writing music, leading bands for parties and, as he traveled and lived throughout Latin America, he absorbed influences from many different cultures into his compositions. Belasco eventually landed in Harlem in the 1920s and '30s where he made a name for himself as a Calypsonian, writing, playing and recording for New York's burgeoning West Indian population.

"Las Palmas de Panama" is actually a medley of two separate Belasco compositions, "Las Palmas de Maracaïbo," a Venezuelan waltz, and "Panama Paseo no. 1," originally written on the completion of the Panama Canal. In order to segue between the different time signatures, we worked out a way to use the cross-rhythm of the waltz to set up the two-beat of the Paseo.

This is our third recording of music from Lionel Belasco (see also "Carmencita" and "Esperanzas"). In contrast to its Viennese cousin, a Venezuelan waltz is an earthier, more polyrhythmic dance. The term "Paseo" ("walk" in Spanish) refers to a section of the dance where couples promenade onto the floor.