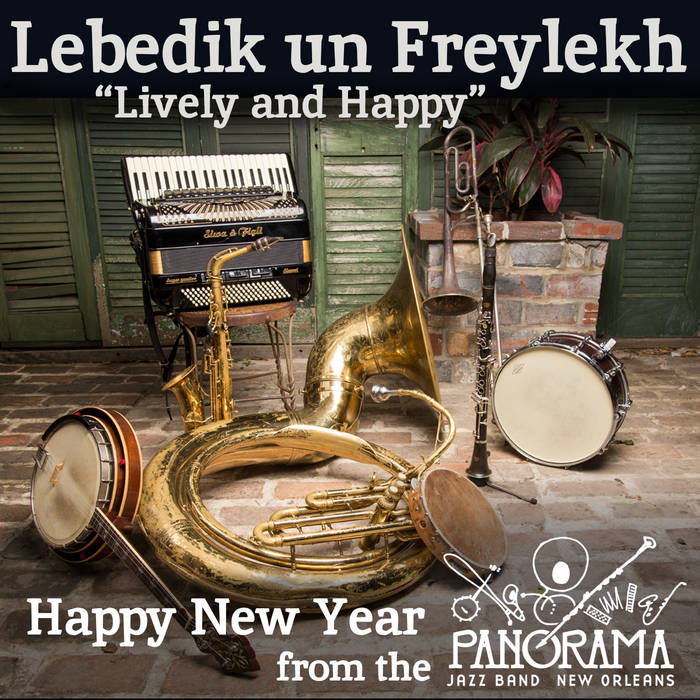 When we play Jewish weddings (as we are privileged to do several times each year), the families always request a "hora." Everybody dances in a big circle, the newlyweds get lifted up in chairs then sometimes friends and relatives will entertain the couple, dancing for them or acting out silly skits while the band plays on. The entire affair often lasts 30 or 40 minutes, leaving revelers and musicians alike exhausted but happy. Sometimes the grandparents will refer to the whole shpiel as a "freylekh." The Yiddish word can be both an adjective, "happy," or a noun, "happy dance," and is a cousin to the English verb "to frolic."

According to our in-house klezmer rebbe, Mark Rubin (who plays banjo on this track), "Lebedik un Freylekh" ("Lively and Happy") is the type of number that would have been used in the Yiddish theater between sets, when the actors needed time for a costume change. The form is very economical with two sections, A and B. But the A section has an AABA structure within it. By the time we've played down the whole page one time, we've had a quick story about this, that, this again, and then the other. Also, while the A section is in Dm, the B section resolves to D major so that, when we turn around back to the top, there's a cool mutation that happens as we settle back into the minor groove for another go-round.

One of the things I really love about klezmer is that you get a lot of joyous music in minor keys. We often think of a minor chord or melody as sounding sad but, when combined with an up-tempo groove for example, it becomes something much more complex and nuanced. Mark says that in Judaism (as well as Jewish art and culture) it's never all one or the other; there's always melancholy in the joy and hope in the pain. It's true, after all. Our child may be getting married but they're also growing up and don't need us anymore.

This is also a rare Panorama track in that everybody pretty much plays the whole time, start to finish, except for a 4 bar break towards the end when trombone and tuba take the lead.

We hope you dig it and that it puts a little extra bounce in your step in 2020!