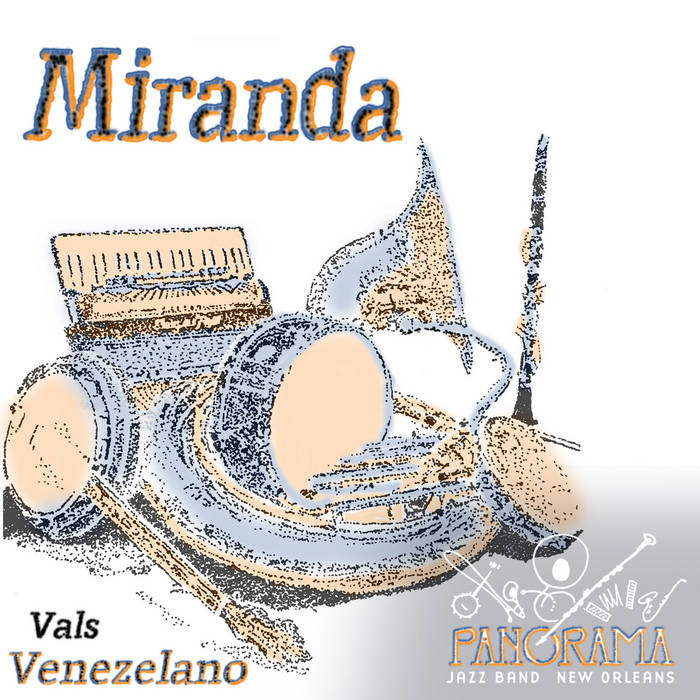 As you know, Panorama loves to try a lot of different-type stuff; we've dabbled in everything from Creole to Yiddish, disco to chamber music. One genre that we've returned to several times is that of the "Vals Venezelano" or Venzuelan waltz (see also "Carmencita," "Esperanzas," "Recordando a Venezuela" and "Las Palmas de Panama.") All of those but "Recordando" are written by the Trinidadian composer, Lionel Belasco (1881-1967) and so is your Panorama track for August, "Miranda."

For this one we employed the same forces as last month's drop, "Time Is Tight" but added me back in on clarinet. That particular 5pc (clarinet, accordion, tenor banjo, tuba and drums) is also the line up we normally bring into Dos Jefes Uptown Cigar Bar, way up on Tchoupitoulas street, when we play there on the first Friday of every month. (Disclaimer: we will not be there this Friday! Gone fishin'...)

Compared to the better known Viennese waltz, the South American counterpart has an earthier and more polyrhythmic groove. For this one, accordionist Michael Ward-Bergeman and I handle most of the melody lines but you'll get to hear tuba ace Matt Perrine on one of the "C" sections plus banjo man Gary Washington on a "B" section. Also check out the maracas work of Panorama drummer Doug Garrison who has actually traveled to Venezuela to study the folk music and was stoked to have another chance to break them out.

As a matter of fact we were recently joined at the Spotted Cat by a Venezuelan family. The daughter and son-in-law live here and the parents were visiting, having gotten out of Venezuela due to the current political and economic instability. We went into one of our Venezuelan waltzes when the old man approached the bandstand and gestured for the maracas. Doug handed them over, went to his drum sticks and we all got a maracas lesson from a true culture-bearer. (There is a clip on our instagram account dated March 30.)

Thanks for listening and let me know how it lands on your ear! At your service,
Ben Schenck
Panorama Jazz Band
New Orleans, LA