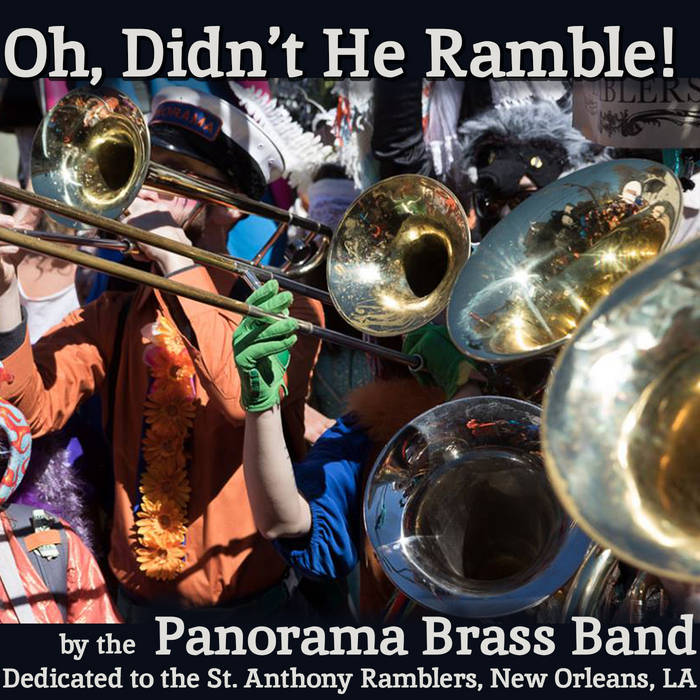 It's that time of year again folks, Mardi Gras in New Orleans! Every Fat Tuesday for the past 20-sumpn years, the Panorama Brass Band has escorted a local walking club called The St. Anthony Ramblers around the Faubourg Marigny and the French Quarter. It all began in 1997 or so with about 20 close friends and us; now it's grown to at least 10 times that number - a rambling tribe of mystical misfits revelling in the streets seeking sensory gratification, satire and universal truth.

This year, for our annual Carnival release, we give you a little tune we always play as we step off on that beautiful morning, "Oh, Didn't He Ramble." Herein you'll find the spirit of Mardi Gras, in all it's inebriated glory, captured the next day, Ash Wednesday, 2013 (see also "Norma la de Guadalajara," "Geljan Dade," "Purim in the Quarter," "Bagopolier Freylekh" and "Boki 13"). The band, tired but tight after a demanding parade schedule, knocked this one out in one take.

"Oh, Didn't He Ramble," an Irish comic song, was written and published in 1902 by the same brothers, J Rosamond and James Weldon Johnson, who gave us "Lift Ev'ry Voice And Sing," commonly considered the African-American National Anthem. Not only were these men performers on the Minstrel circuit, they were also social activists (JW was executive director of the NAACP from 1920 to 1930) and Harlem Renaissance intellectuals.

"Didn't He Ramble" is among the most commonly performed songs in the entire canon of New Orleans Jazz. It is especially associated with the tradition of the Jazz Funeral, a happy tune played on the way home from the cemetery. The English word "Ramble" comes from the Middle Dutch, "Rammelen" which means to walk about aimlessly, often used to describe farm animals looking for a drink in the heat of the day.

Mardi Gras day is February 13th this year and if you can make it to New Orleans, come find us. Round about 9:30 that morning, after the blessing of the Red Beans and performance of the sacred "St Anthony Chorale," someone will shout "Are you ready to RAMBLE?" and we'll be off.

Special thanks to trombonist and Jazz Historian David Sager who helped shed light on the history of "Oh, Didn''t He Ramble." Also huge gratitude to Ramblin' Don Keller for the cover photo that captures the spirit of Panorama Brass with the St Anthony Ramblers on Mardi Gras Day (which is a thing).

We don't actually sing on this track, but when we do sing it, the lyrics go like this...

His feet was in the market
His head was in the street
All the women passin' by said
"Look at that monkey meat!"