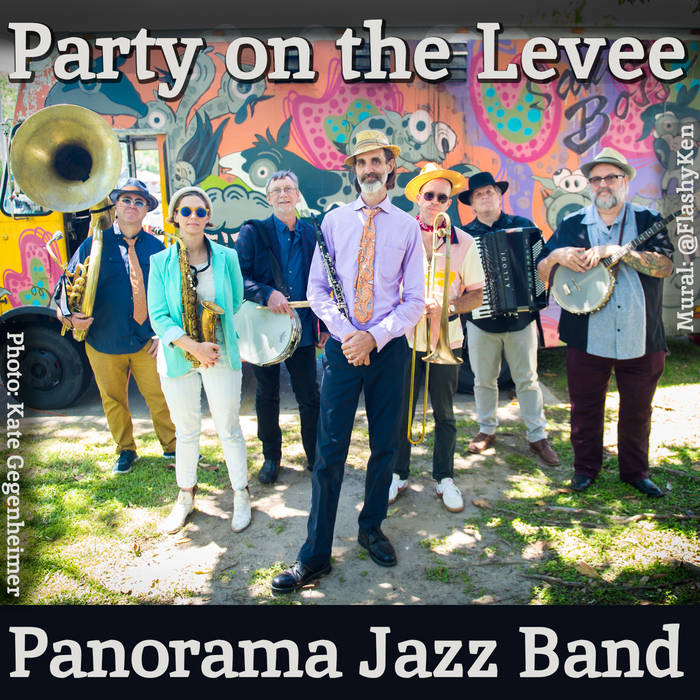 Although the main event is postponed til October, here's a festive new track from your personal Jazz Band that describes what many of us have been doing during the pandemic, making a "Party on the Levee."

One of the ways I've stayed busy the past year has been to write music. I have this notation software that I use to score for the band and I created a template for clarinet, alto sax, trombone, accordion, tenor banjo, tuba and drums. So, whenever I feel like it, I can open a blank page, just start slapping notes down and the software plays it back for me. Some ideas die pretty quickly but some keep growing.

Today's offering, "Party on the Levee," is one that almost seemed to write itself. It's a fun, happy, at times silly, 3 minutes and 54 seconds featuring Charlie Halloran on the trombone. The music describes Charlie and his Calypso band, The Tropicales, setting up on the levee to play while people social-distance in the grass, sip wine, and soak up the moment.

Kinda like JazzFest. We hope this party will hold you over until it actually happens in October.

We had a recording session on Friday, Apr 16, where we recorded six really terrific new tracks for you including four original numbers by me, your personal tunesmith.

For the past five years we've been recording, editing, mixing and mastering with Lu Rojas in his studio way Uptown on Oak Street. Unfortunately that building got sold and Lu is now working from home. He doesn't have space to bring the band in but he's still mixing and mastering your monthly Panorama tracks.

To record then, we returned to Marigny Studios in the old Luthjen's building at Chartres and Marigny. You may recall that we did a live recording over there on Valentine's Day, 2020, and then sent you several of those tracks over the next few months ("Dulgo Horo," "Sali Dame," "Mandinga," "Trombon Hora," "Martinique" and "Pembe Oro"). Rick Nelson, the sound engineer, captured really terrific sound on us so we decided to work with him again.

Also, that room has deep vibes left over from it's days as an old-school New Orleans dancehall in the 50s and 60s.