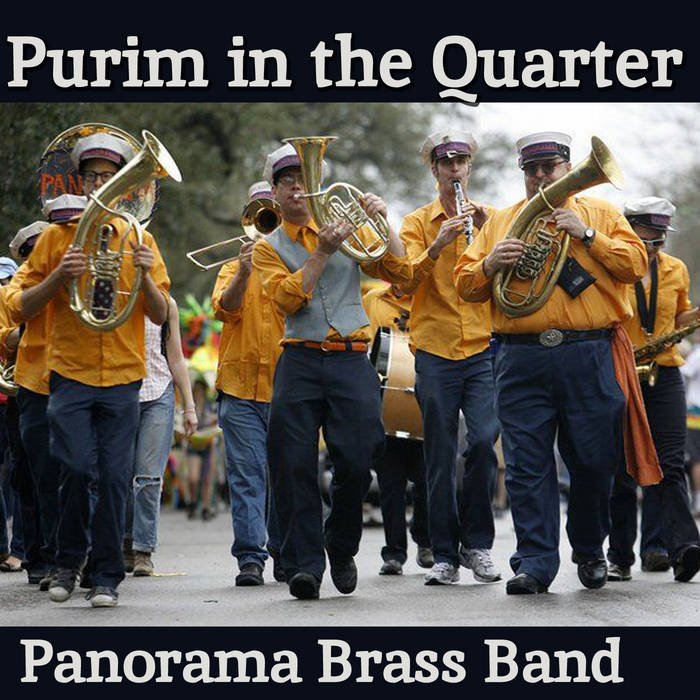 Drunken revelers in masks and costumes rolling through the streets of the French Quarter followed by a raucous brass band! Wait a minute, didn't we just do that? But this isn't Mardi Gras, this time it's the Jewish holiday of Purim.

These drunken revelers are members of New Orleans' Krewe du Jieux, led by reveler-in-chief LJ Goldstein. Purim is the Jewish holiday celebrating the biblical story of Esther in which she and her cousin, Mordecai, triumph over Haman, adviser to the Persian king, who wants to kill all Jews in the Empire.

Your Panorama track for March, featuring the Panorama Brass Band, is a medley of two pieces coming from a pocket of Europe where Jewish communities (along with their Yiddish culture, language and music) survived the Holocaust. The first, originally titled "Bessarabian Bulgar" comes to us via the late Moldovan clarinetist German (pron. "GAIR-mon") Goldenshteyn (1934-2006) who emigrated to the U.S. in 1994, bringing with him close to a thousand authentic Jewish melodies. Goldenshteyn, working with American clarinetist Alex Kontorovich, provided a direct bridge to the modern klezmer revival from the old, mostly extinct, pre-war klezmer scene of Eastern Europe. For more of that music, check out his wonderful and important CD, "German Goldenshteyn: A Living Tradition."

The second tune in our medley, "Khasitsky Horo," is from a terrific contemporary Ukrainian band, Konsonans Retro, from whom we've borrowed material in the past (see "Trombon Hora" on our live CD, "Dance of the Hot Earth.")

We recorded this one (as well as last month's offering, "Geljan Dade") on Ash Wednesday, 2013, after a brutal Carnival schedule that left us all exhausted but happy. We somehow managed to get ourselves up and into the studio the next day, our chops tired but strong, for the recording session. We'll be releasing the
results, on an occasional basis, for the next several years.

Thanks also to klezmer, multi-instrumentalist and raconteur Mark Rubin, who plays tuba on that album, for bringing the music to Panorama Brass Band.

And another thanks to accordion wizard and Panorama's alto horn man Patrick Farrell, who transcribed the "Khasitsky Horo" from the Konsonans Retro album "A Podolian Affair."

Thanks to Mark Bingham for wonderful food and beautiful vibes
during the recording session.