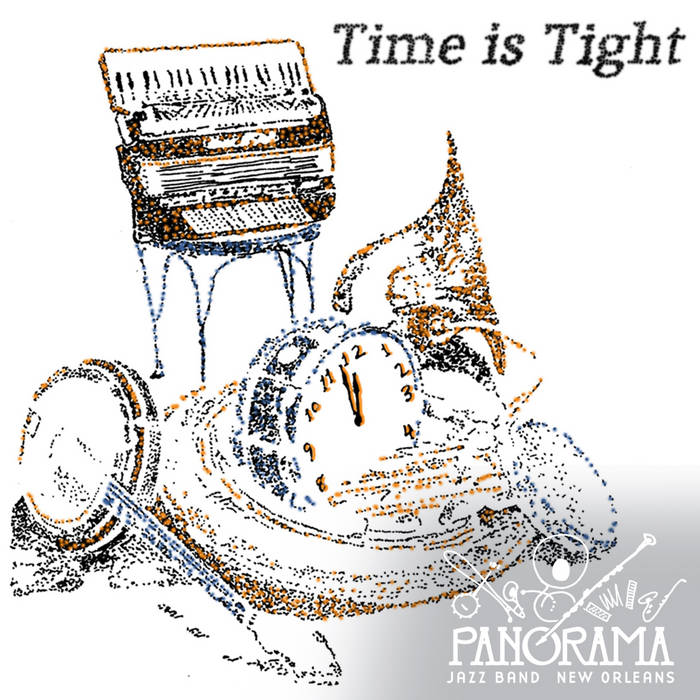 The last five tracks Panorama has put out in our Good Music For You Club have featured a smaller segment of the band: clarinet, accordion and drums. Today we bring you a four piece with accordion, banjo, tuba and drums. As a matter of fact, I believe this maaaaay be the first Panorama track (out of our 137, going all the way back to 2003) that does not include yours truly on clarinet!

I'd been thinking for a long time that this particular instrumentation could tackle some of the wonderful music of Booker T and the MGs. Instead of Booker T Jones on the Hammond B3 organ, we offer Michael Ward-Bergeman on accordion, instead of Steve Cropper on electric guitar, Gary Washington on tenor banjo and instead of Donald "Duck" Dunn on electric bass guitar, Matt Perrine on tuba. Both groups use drums. In fact both feature drummers from Memphis, TN.

Panorama's primary drummer is Doug Garrison (also well known as a
member of the Iguanas). Doug grew up in Memphis and remembers his dad playing Booker T and the MGs albums around the house when he was a little kid. So Al Jackson's approach to the drums is in Doug's DNA. In the studio, Doug locked right into the drum part on "Time Is Tight" plus copped Jackson's style on the fills.

According to Wikipedia (which we support financially and invite you to do the same), Booker T and The MGs got their start in 1962 as session cats for Stax Records in Memphis. There they backed such acts as Sam and Dave, Otis Redding, and Wilson Pickett. But they also liked to jam in the studio after hours and quickly had a hit that same year with the highly recognizable "Green Onions" which reached #1 on the R&B chart, #3 on the Pops and launched their career. Today's selection, "Time Is Tight," was written for the soundtrack of the 1968 film "Uptight" and released the following year. It reached #7 on the R&B chart, #6 Pops.

Our goal for this one was actually an attempt to reproduce the original recording nearly note-for-note in order to spotlight the variation in instrumentation. So the tune, the accompanying parts and the tempo are all nearly the same but the tone colors and the vibe are a little different owing to the Panorama line-up. Let us know how it feels to you!