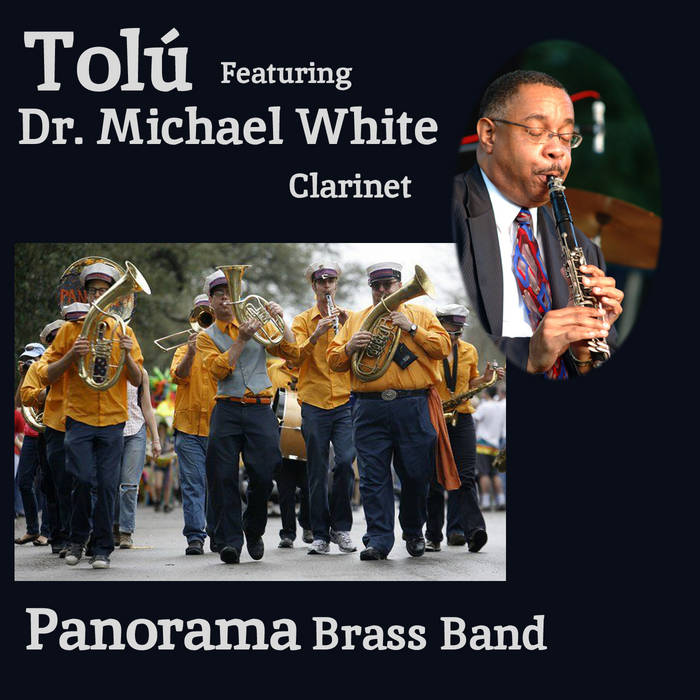 Ben met Dr. Michael White on the Mall in Washington DC back in the Summer of 1985. They struck up a conversation that day and within a couple years, after Ben relocated to New Orleans, they became fast friends. Now, over 30 years later, they have finally made their first recording together!

The selection, a cumbia titled "Tolú," was written and originally recorded by the great Colombian clarinetist and bandleader Lucho Bermúdez and his Orchestra. Cumbia music, Bermúdez' stock in trade, originates among the Afro-Latin people along Columbia's Caribbean coast and this tune's title refers to a town in that region.

The number opens with a dialogue between the trumpets and the saxophones before turning the stage over to the clarinets, Michael and Ben, riffing in G minor. After a repeat of the form, Dr. White takes off on an ad lib solo with the midhorns punctuating in accompaniment and Boyanna urging him on with the tenor drum. The band gradually builds behind the soloist, adding saxophones and then trumpets, to the point where, just as they are closing in, the clarinets join up and slide into more G minor riffing, which then dissolves into diminished chords. At that moment the trumpets announce a return to the out-head after which Michael gets the last word atop an extended minor chord to bring the whole party to an end.

Special thanks to Matt Knowles, propietor at Domino Sound, a record store on Bayou Road, who slipped Ben a Lucho Bermúdez cassette several years ago and said, "y'all should play some of this stuff."

Thanks also to Davis Rogan in whose "man-cave" this session was recorded. See also our August 2016 release, "Blue Star Jubilee" which was also recorded that day.