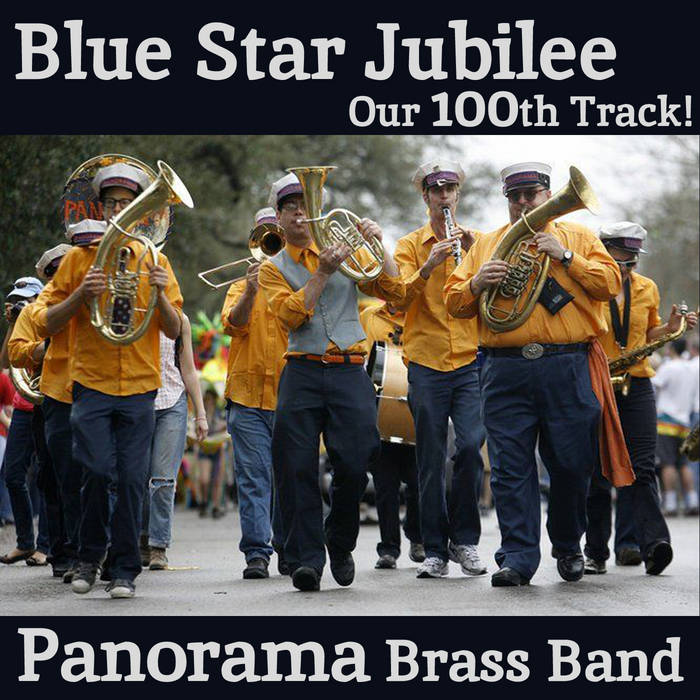 Friends, here it is - Panorama's 100th track, the "Blue Star Jubilee." And this one's a banger.

We released our first album, Another Hot Night in February, in April 2003 and those 16 songs put us on the trajectory that has led to this moment. Katrina slowed us down a little, becoming parents slowed us down a lot, but now, 13 years later, we offer you number 100 and hope that you enjoy it.

Although we don't know the tune's original title, Plave Zvezde ("Blue Stars" in the Serbian language) is the name of the Roma wedding band from whom we learned this month's presentation. The arrangement was brought in by Panorama Flugelhorn man JR Hankins with input from Patrick Farrell (who you will have heard on alto horn with the brass band and accordion on the Jazz Band's first 2 albums). The form is basically a series of super-bad riff patterns with a couple solo breaks and an ad -lib section featuring the alto saxophones.

As you may know, trumpets and trombones are fashioned with a "cylindrical bore" where the inside diameter of the tubing is roughly the same from the mouthpiece to the bell where it finally flares out to amplify the sound. Because none of the Panorama trombonists were available for the May 4th recording session, we took the opportunity to feature our rotary-valve euphoniums, played by Shaye Cohn, John Gerken and Matt Schreiber as well as the flugelhorn, played by JR. These use a "conical bore," the inside diameter gradually increasing along their length, and are the same instruments favored by brass bands in the Balkans for their warm, broad yet agile tone. To hear their special quality, listen to the Flugel break on the D section where JR and the mids get into a two-way thing accompanied by the drums.

When discussing the plan for the ad-lib section, alto saxophonists Tomas Majcherski and Aurora Nealand announced that they had a concept for a two-alto thing and asked that we grant them free reign. Steve Glenn (tuba) and Dan Oestreicher (bari sax) came up with a bass vamp and the rest of us filled in around it.

Another lovely feature of the session is the room where we recorded. Ben's brother-in-law, pianist, songwriter, singer bandleader and HBO character Davis Rogan, lives in an historic house in New Orleans' Treme neighborhood. The living quarters lies above what had been a hardware store back in the day but now serves as Davis' office, practice space and man cave. But from it's days as a brass band rehearsal space, the walls are covered in murals depicting brass band musicians and listing many of the old-line outfits such as the Eureka, Excelsior, Onward and Olympia as well as contemporary groups like the Dirty Dozen and the Rebirth. And Panorama hopes to one day rank in that number.

Rumor has it this is also the room where the Lil Rascals Brass Band recorded their seminal 2001 album, "Buck It Like A Horse. In mixing the session, Don Godwin (baritone horn emeritus) loved the room sound so much he used it as the basis of the mix, only riding up the individual mics in spots. Take a listen and let us know what how it feels to you.