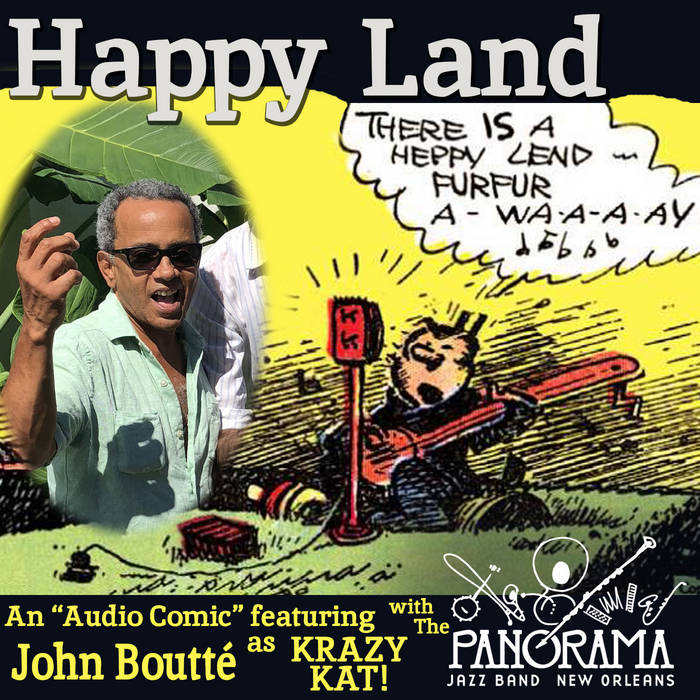 Back in February, New Orleans author (and "Good Music For You" subscriber) Michael Tisserand approached me about a collaboration. He had written a biography of a singular New Orleans figure, the trailblazing cartoonist George Herriman (1880-1944) who created Krazy Kat. ("Krazy: George Herriman, a Life in Black and White" www.michaeltisserandauthor.com)

In the strip, Krazy plays the banjo and is often seen singing the line "there is a heppy lend, fur fur away..." Michael explained that "Happy Land" was an old Protestant hymn Herriman liked to quote and proposed we make something out of it to release this month in conjunction with the arrival of his book in paperback.

The best part though was when he told me that John Boutté, a relative of Herriman's, wanted to sing the part of Krazy Kat!

I paid a visit to John in his North Shore hideaway where, sitting at the piano, he banged out chord changes to create a jazzified version of "Happy Land" using satyrical lyrics that were popular on the stage in the late 1800s. Then, drawing from actual Krazy Kat strips, Michael and I cobbled together a script for our "audio comic" that features a dialogue in which I try to pin down Krazy's gender identity. (Krazy Kat was gender-fluid before that was even conceivable to most Americans.) Then, in the final chorus, Krazy, using rhyming couplets found in the comic, professes his love for Ignatz, the mouse who's always throwing bricks at his head.

When Panorama, John and Michael finally gathered in the studio a few weeks ago, we approached the work from a completely different angle than usual. Rather than playing straight through start to finish like we normally do, we took this one in discreet segments. For example, the accordion trill (right before the punchline when Krazy skillfully evades questions about his identity) was recorded after most of the band had been dismissed for the day and then later placed where it belongs in the narrative.

You will also hear, at the point where I am most befuddled by Krazy's inscrutable replies, a "Dreamy Waltz," which some of you may recognize as a whole-tone treatment of our song-of-the-month for April, a lovely dance by Erik Satie titled "Je Te Veux" ("I Want You.")

After we had everything in the can, the question remained whether the track would flow organically once we edited it all together. I'll let you be the judge of that! Let me know how it strikes your eardrums and if the narrative is coherent.

Krazy: "Hold it Panorama!"
Ben: "What's the trouble Krazy?"
Krazy: "Faster! Faster! This is jazz music, not some dreamy waltz! Paul, gimme a roll off."

(Jazz version)
There's a hep-hep-heppy lend, fur fur away
Where they has them ham n eggs several times a day
Oh hear them bordas yell, when they hear that kitchen bell,
They gonna give the landlord he-
Several times a day

(Out chorus)
"My heart is aching with a pain
Although there ain't no sign of rain
So haste my love, I can't wait much longa
My weakness is gettin' stronga!
When your sweety ain't around
It's just like music without a sound
Let's have ham n eggs ev'ry day
In that happy land far away!