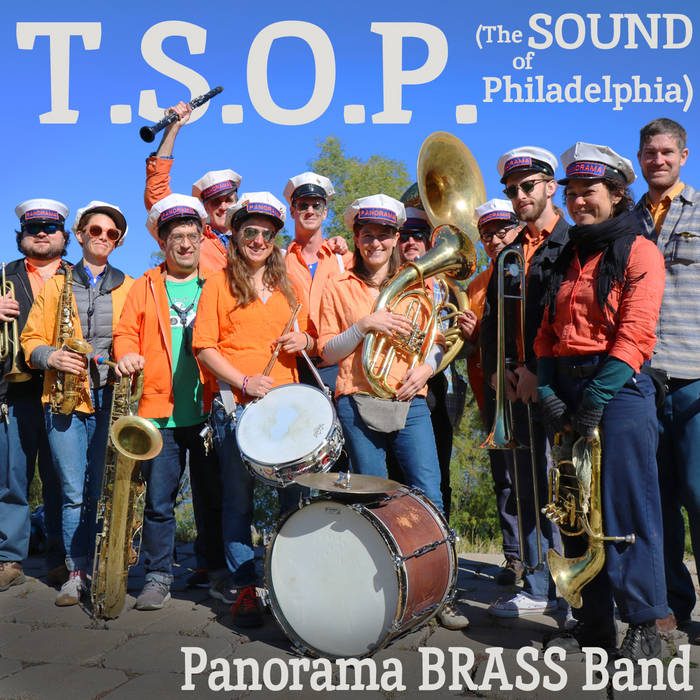 In lieu of actual Mardi Gras fun, your Panorama track for February is from the Panorama BRASS Band. In fact, this is the first brass band number we've dropped since "Oh Didn't He Ramble" on today's date in 2018.

Our marching contingent involves a lot of people so it's much more expensive to record than the sit-down group. We finally had an opportunity to go "back in the studio" again (actually, due to COVID, we recorded this outdoors at the Music Box Village) thanks to the generosity and creativity of our friends in the Krewe of Red Beans. We've been parading with their spin-off, Krewe of Dead Beans, every Lundi Gras since 2018 but, since the parade is cancelled this year, they paid us to record three tunes for their members AND they're letting us put them out too!

(I'll mention here that, if you'd like to show some gratitude to Devin DeWulf and the others in the Krewe of Red Beans, you can make a charitable donation to their incredibly creative and robust 501(c)(3), "Feed The Second Line." They work hard to get money and food out to New Orleans culture bearers (yours truly included) during these difficult times. For one thing, be the first on your block to snag their très cool Panorama T shirt!)
* * *

A few years ago Panorama bass drummer Chris Davis and I began talking about a tune we wanted to bring into the repertoire, the Disco anthem T.S.O.P. (The Sound of Philadelphia) which you may remember as the theme from Soul Train. Chris is as tall as I am (see photo) and I remember standing with him in the middle of St Charles Avenue while the parade had stalled and discussing how TSOP switches back and forth from major to minor tones. As you're about to hear, when that minor hits there's a vibe shift where the band really gets to work. In Chris's words, bringing that to the street "would be dope."

It won't surprise you to hear that I am deeply relieved to have a new president and much more optimistic about the future than I have been in a very long time. And, while I try not to presume about anybody else's political opinions, I for one feel that there are huge problems in our country and in our world and that we can now pull our heads out of our collective asses and get to work fixing them. So, for me, this tune echoes both that sense of jubilation I felt once the new occupants finally made it inside the White House doors as well as that urge to get down, get to work and set things right.

There were several communities in America that really dug deep to pull out the win for the Biden-Harris ticket. Today we're spotlighting "Quakertown," Philadelphia, PA! Special shout out to our musician friends in the local klezmer community as well as the West Philadelphia Orchestra who went downtown to bring joy while the ballots were being counted.

In closing I'll add a brief quip. You may know that, as well as a child of the 70s, I am in fact a life-long member of the Religious Society of Friends which, at a recent gig, prompted the appellation "Quaker Disco." You may laugh but I'm here to tell you: it's a thing!

So, in the lyrics of the original recording by MFSB (Mother Father Sister Brother), we wish to send out this message:

"People all over the world,
Let's get it on.
It's time to get down!"
Thanks for listening.

We don't sing on this track, but the original lyrics go:

"People all over the world,
Let's get it on.
It's time to get down!"

Huge thanks to Devin Dewulf and others in the Krewe of Red Beans / Dead Beans as well as Rusty Lazer and the gang at the Music Box Village.