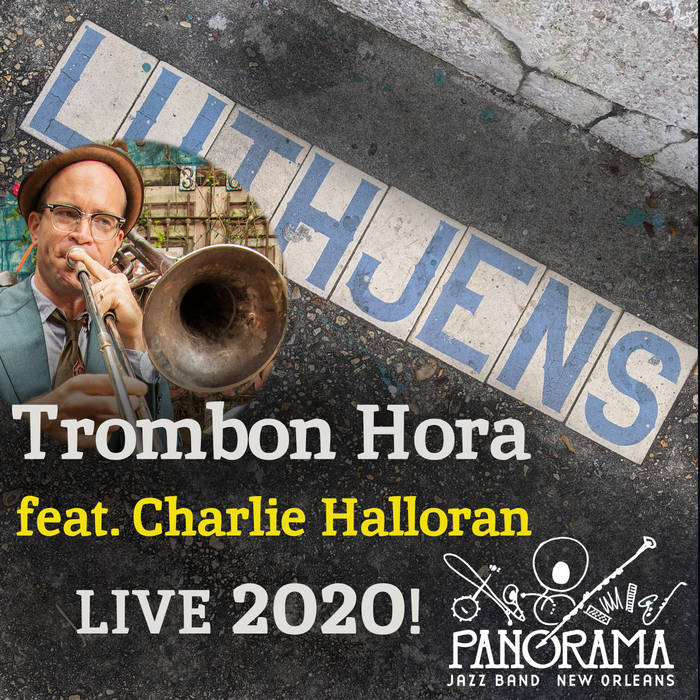 For your October song-of-the-month we return to the vault. Here's another track from the live recording we made on Valentine's Day this year (see also "Dulgo Horo," "Sali Dame" and "Mandinga"). Like "Mandinga," you can also find a live version of "Trombon Hora" on our live CD, "Dance of the Hot Earth" (2013). For die-hard Panorama fans like me, it's interesting to listen to the two versions back to back. Of the seven players on each track, three appear on both: Doug Garrison (drums), myself (Ben Schenck, clarinet) and Charlie Halloran (trombone).

Way back in July of 2008 we'd been limping along without a trombone player since Geneviève Duval, a Canadian, started getting hassled at the border and was no longer able to work in the U.S. There we were, doing our best at our weekly Spotted Cat gig when in walks a handsome young man with a trombone asking to sit in. With Charlie's big sound, great technique, fine-tuned ear, open mind and intuitive grasp of that instrument's role in the ensemble (not to mention his wide open availabilty) we hired him on the spot! Turns out he's also good company, easy to get along with, still plays his ass off and is still our first-call trombonist over 12 years later.

The - hmmmmm how do you say... the vibe, the zeitgeist, modus operandi? - of the band is a thing that constantly changes and evolves. Panorama's getting old enough where we've been through several distinct phases (although I must confess, I don't have the perspective to define them). Players come and go, some stick around. Tunes come and go, some stick around. I have started to feel that the band and it's music have a life of their own and we're just here to give voice to it.

But I digress. "Trombon Hora" is a number we started to play several years ago when Patrick Farrell (our former accordionist and some times alto horn player in the brass band) brought a wonderful CD to our attention: "A Podolian Affair" by the Ukranian brass band Konsonans Retro. Check it out, it's a really great listen. "Trombon Hora" is one of the tracks on that album - it totally knocked me out and I knew I had to transcribe it for Charlie. And Charlie instantly made it his own as you'll hear on both the 2013 and the 2020 versions.

As for comparisons, I'll leave that up to you - I'm interested in your thoughts. I will say I definitely prefer my solo in the present iteration! Oh by the way... I think "trombon" is the Yiddish spelling.

Many thanks to Julian Mutter and Co. for having us play for their annual Valentine's Day Party, recording the band and permitting us to share the tracks with you.